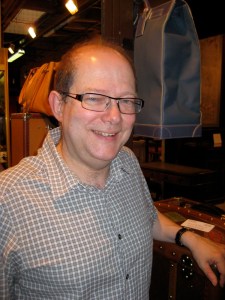 Alain Zisul was a finance controller in a multinational corporation before he and his wife, Helen, a former English teacher, took over, Le Monde Du Voyage, the business his father started 30 years ago, and was the first to sell vintage Hermes.  Today, in addition to Hermes luggage and accessories, Chanel jewelry and handbags, their Stand #15, Allée 3 in Marché Serpette (110 Rue des Rosiers) has perhaps the best collection of Vuitton trunks from the end of the 19th century until now, most from the 1930s.

A personal annual ritual is to add an Hermes vintage scarf from the Zisul’s vast collection (over 200 on site and an equal number in his private collection) to my own. It’s the easiest way to change the look of an outfit while traveling and adds no weight to luggage allotments.  What better souvenir of Paris?

Alain told me a remarkable story that anyone may submit a potential design for an Hermes scarf and, if  judged worthy by a panel of in-house design experts (a daunting feat) it is put into production.  One outsider who made the grade was a postman from Texas, Kermit Oliver, whose American Indian design was not only accepted but became so popular he followed it with a series of western-themed designs for Hermes, signed by him, that are now sought by specialty collectors.

Keeping to the theme of travel, for those who have a special interest in memorabilia from the great ocean liners of the past,  Zisul has a special display cabinet filled with nautical souvenirs and posters from the age of romantic travel.

Some of the celebrities who have left their names in the Zisul autograph book include:
Lionel Richie, Ben Harper, Donald Sutherland, Alain Ducasse, and Jackie Chan, among many others.